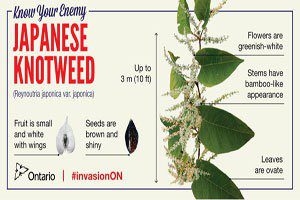 A property firm which allowed a jungle of knotweed to grow into an 8ft-high jungle has been fined £18,000 in the first prosecution of its type.

The invasive plant has been spreading for 10 years and was blocking light to neighbouring homes.

Lawyers for the council believe it is the first time the Anti-Social Behaviour, Crime and Policing Act 2014 has been used to tackle nuisance overgrowth.

Amie King moved into a property in Ash Road, in the Horfield area of the city, in 2007 and soon became plagued by “the forest next door”.

She told BBC Radio Bristol: “It’s worrying because it can affect the sale of our properties, mortgages – it’s the stress of it all. You don’t have anyone to help you.

“We had no idea what it was and were unsure of what exactly it was overgrown with – just big green plants. It’s like a forest, my children refer to it as ‘the forest next door’.

“We went through the council and for years they were unable to do anything because legally they didn’t have anything to use.

“For years and years, we’ve been banging our heads against a brick wall feeling like no one can help.

“The neighbours were completely fed up.

“They were delighted as I was to hear about this new law which the council can now use to prosecute private landowners. It hadn’t been used before in England.

“It’s really encouraging that not only did council agree to prosecute on our behalf we have also had a great result from it. This should fill people with a lot of confidence.”

MB Estate Limited was served with a community protection notice in May 2017 but, after failing to comply, were prosecuted using the Anti-Social Behaviour, Crime and Policing Act 2014.

The company didn’t attend the hearing or sentencing and was fined £18,000 plus costs in its absence at Bristol Magistrates Court on December 4.

Councillor Kye Dudd, the cabinet member with responsibility for regulatory services, said: “Using this new Anti Social Behaviour Crime and Policing Act 2014, we suspect it is the first time a case like this has gone forward under that act.

“We became aware of this case back at the end of 2014 – the normal process is we try and resolve things informally with discussion and we have had hardly any engagement from this company.

“There was a no show at court so it was issued in their absence.

“It’s pretty poor behaviour which was maybe taken into account when the magistrate issued the fine.

“It is unfortunate the council needed to resort to formal action, but we hope that this sends a message that appropriate action will be taken, when necessary, to protect the public.

“Knotweed has the potential to cause a significant nuisance to property owners, causing structural damage as well as anxiety over the effect on property prices and the ability to secure a mortgage.”

The firm was issued with a court order requiring it to remedy the situation and the knotweed has now been cut back.

Japanese knotweed was introduced to the UK around 200 years ago as an ornamental plant but is now common and widespread. It is “indisputably the UK’s most aggressive, destructive and invasive plant”, according to the Environment Agency.

Under the provisions made within Schedule 9 of the Wildlife and Countryside Act 1981, it is an offence to cause Japanese knotweed to grow in the wild.

Since 2013, homeowners selling their property are legally required to state whether Japanese knotweed is present on their property.

This can make it difficult for buyers to obtain a mortgage due to the structural issues the weed can cause.