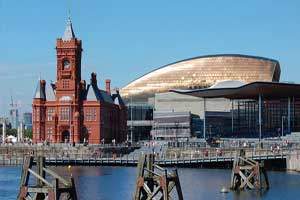 A Cardiff landlord, Mr Lvin George Chisholm was prosecuted after Cardiff Council investigated his property in Grangetown and found serious issues including breach of fire safety.
The matter was initially reported by Wales Online on the prosecution of Mr Chisholm, after a tenant living on his property contacted the council about the condition of the let property.
Cardiff council officer visited the let property and carried out an inspection relating to the issue’s reported by the tenant. Cardiff Council said that the ‘horrifying’ findings included a defective fire alarm that had not been maintained, no fire protection for the gas and electricity meters, no fire escapes, an ‘unsafe’ kitchen, waste water pipes and heating. The Council officer also found that access was available to an unsafe flat roof and all these items were not maintained and were allowed to fall into disrepair.

In turn, both the front and back garden of the two-storey property – divided into two flats – were filled with rubbish and builders’ waste, and at Cardiff Magistrates Court, Mr Chisholm pleaded guilty to 12 charges relating to houses in multiple occupation (HMO) management and licensing regulations. He had initially pleaded not guilty in September, and at sentencing was given a fine of £5,000.

Lynda Thorne, cabinet member for housing and the council’s community’s councillor, stated: ‘This case is a clear example of a landlord renting out a property in a state which is completely unacceptable. The pictures of the property speak for themselves. I would like to make it clear to all the landlords that think they can rent out sub-standard properties that they need to think again.

‘If these matters are reported to us, then we will investigate and the take necessary action in the best interests of the tenants.’

Mr Chisholm told Wales Online after the case that the property had been managed for several years by a housing association, but that he was still the owner, and maintained that he was a ‘good landlord’, as well as noting that he still owns the property, with all the issues having ‘been resolved’.

Mr Hanson from the British Landlords Association, said “recent prosecutions for disrepair especially where the safety of tenants are at stake have received heavy fines”.