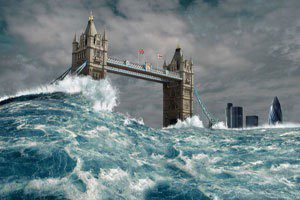 London faces the threat of flooding due to the impact of rising sea levels, a report warns.

Other major coastal cities such as Houston, Manila, Jakarta, Lagos and Dhaka could all face similar risks, according to Christian Aid’s Sinking Cities, Rising Seas.

Climate change could act as a “threat multiplier” to existing factors such as sinking ground and subsidence, water extraction and bad planning, increasing the risk of flooding.

London’s sinking problem is largely a vestige of the last ice age when glaciers that weighed Scotland down and lifted up the south like a see-saw melted and reversed the effect, according to the study.

Panel on Climate Change is meeting this weekend

The influential Intergovernmental Panel on Climate Change is meeting this weekend to finalise a report on the effects of global temperature rises of 1.5C (2.7F) above pre-industrial levels and how to prevent further warming.

London is increasingly vulnerable as a result of sea level rises, with the city having to use its key primary flood defence, the Thames Barrier, twice as much recently as was anticipated when it opened in 1984.

Houston, which suffered major flooding last year following Hurricane Harvey, is vulnerable to flooding and subsidence due to extracting groundwater for its population and oil and gas.

Sea level rises and storm surges will only exacerbate the problem, the report said.

Bangkok, which is only 1.5m (4ft 9in) above sea-level, could be under water in the next 15 years, officials have warned, with the Thailand capital sinking due to water extraction and heavy buildings pressing into the sediment.

Similar issues are affecting Shanghai, but it has taken strong measures to tackle them.

Manila, Jakarta, Lagos and Dhaka in Bangladesh are all also threatened by problems such as subsidence, groundwater extraction, a lack of adequate drainage, the weight of buildings and the loss of natural flood protection including mangroves.