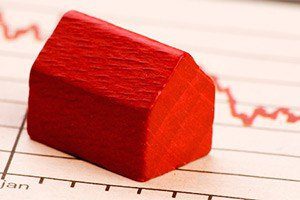 House prices in London fell 0.5 per cent during 2017 – the first fall for eight years – according to the latest house price index from the Nationwide Building Society.

Across the UK, house prices rose over the year, but by a modest 2.6 per cent, according to Nationwide. This compares with a rise in property values of 4.5 per cent during 2016.

But this slowdown in the housing market on a national level masks considerable regional variation. While house prices fell in the capital, they rose by 5.2 per cent in the West Midland over the last year. This is an increase on the 4.1 per cent gain seen in 2016.

The South West, the East Midlands and the North West all recorded house prices gains of at least 4 per cent.

East Anglia was the region with the biggest slowdown. In 2016 house prices rose by 10.1 per cent in the region. Last year the increase was just 2.3 per cent.

He adds: “Low mortgage rates and healthy employment growth continued to support demand in 2017, while supply constraints provided support for house prices. However this was offset by mounting pressure on household incomes, which exerted an increasing drag on consumer confidence as the year progressed.

“The impact of previous policy changes meant that demand from buy-to-let investors remained subdued in 2017.”

He added: “The significant disparity in house prices across the UK has been a recurring theme in recent years. In this respect 2017 saw the beginnings of a shift as rates of house price growth in the south of England moderated towards those prevailing in the rest of the country.”

Garrington Property Finders managing director Jonathon Hopper says: “For the first time in nearly a decade, the North-South divide has been reversed.

“London’s sliding prices held back southern England as a whole, and allowed price growth in the North to come out on top.

“But disappointing as it may have been for Southern sellers, the property market needed a topsy-turvy year to regain some equilibrium.

“The years of double-digit price growth in London’s hottest postcodes were always going to be unsustainable, and 2017’s modest fall in prices in the capital has injected a valuable reality check.”

He added that estate agents were seeing “a flight of capital” from London, as domestic buyers look for better value elsewhere. But he says a weak pound and softening prices in the capital’s premier postcodes meant they continued to attract interest from international buyers.

Online estate agents HouseSimple founder Alex Gosling adds: “The housing market has proved surprisingly resilient in 2017. Even a calamitous General Election and the first interest rate rise in a decade failed to knock it off its tracks.

“The major surprise during 2017 was undoubtedly the slowdown in London house prices. It’s been 13 years since the capital sat at the bottom of the house price growth table, and since then we have seen prices surge to unprecedented and unaffordable levels.

“Fortunately, there’s no longer the reliance on the London market to prop up the rest of the country. Growing regional business hubs have seen other major UK cities prosper, while London has suffered as property prices have become unaffordable for the majority.”