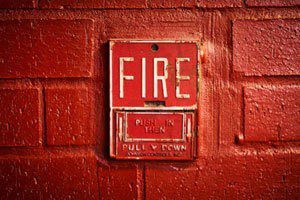 landlord who failed to fit smoke alarms inside a rented house where two boys died in a fire has been jailed for a year following a landmark case.

Kamal Bains was told his inability to install smoke detectors at the property in Huddersfield, West Yorkshire, was a “significant cause” of the deaths of Logan Taylor, three, and two-year-old Jake Casey.

The youngsters died when an electrical fault in a TV caused a fire in their bedroom in February 2016 as their mother Emma Taylor was beaten back by heat as she tried to rescue them, Leeds Crown Courtheard.

Bains, 51, of Stableford Gardens, Huddersfield, whose property company managed the house, admitted a breach of health safety law on Monday in a case believed to be the first of its kind.

West Yorkshire Police said the prosecution was the first to be brought since legislation was passed in October 2015 which requires private sector landlords to have at least one smoke alarm installed on every storey of their properties.

Bains had been on trial for manslaughter but the charges were dropped after he admitted the health and safety violations.

Sentencing him on Wednesday, Mr Justice Males, told him: “Your failure to fit smoke alarms was a significant cause of the children’s deaths.

“Thus the harm caused by your failure could not have been more serious.”

Bains was the director of property management company Prime Property Estates (Yorkshire), which maintained around 140 homes in the Huddersfield area on behalf of private landlords for a 10 per cent cut of the rent.

Ms Taylor told the two-week trial, which ended when the manslaughter charges were dropped, that she asked Bains “time after time” to fit alarms at the house he managed in Alder Street.

In an impact statement read to the court, she said: “I don’t think I will ever recover from this awful tragedy. The worst thing is I won’t get to see my boys grow up.”

The judge said that tests carried out by investigators showed that Ms Taylor would have had “a few minutes” to rescue her two boys if an alarm had been fitted.

Ms Taylor and Mr Casey, the boys’ father, said in statement after the hearing: “We do hope that this case highlights this important issue and for people to know their responsibilities as landlords or letting agents and to take appropriate action to ensure that any property they are responsible for has working smoke alarms.

“Such a simple check could have saved the lives of our boys and we want to ensure that this does not happen to anyone else.”

Detective Superintendent Steve Thomas, of West Yorkshire Police, said: “We also hope that this case is a stark reminder to landlords and letting agents to treat their responsibilities seriously and they have an obligation to ensure that all properties are fully equipped with all adequate safety measures to ensure the safety of their tenants.”

West Yorkshire’s Deputy Chief Fire Officer, Dave Walton, said: “Had there been working smoke alarms in this property, the outcome could have been very different and these brothers could have had a future to look forward to.

“As firefighters, the importance of having working smoke alarms is a message that we try and get over to the public day in and day out.”

“This landmark case shows how vitally important it is that landlords and letting agents take their responsibilities seriously or the consequences do not bear thinking about.”