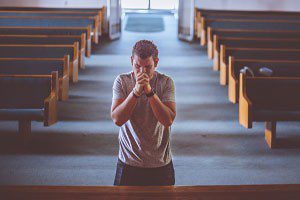 Churchgoers were locked out when the landlord changed the locks to the building.

A pastor of a church even in the awake of COVID-19 wanted to keep the doors open, saying the shelter-in-place orders violated his freedom to assemble.

The landlord of the Cross Culture Christian Center in Lodi, California last week locked out the congregation.

The pastor was keeping the church doors open, in defiance to The San Joaquin County Health Department, who had ordered the church to shut its doors last week.

A small Godly motley crew of congregants, showed up Sunday; to defy the shelter-in-place order, made by the Health Department.

The locked-out congregants, were bemused when they found they had been locked out of the church; the turn of events is not what they had anticipated.

Jeremy Duncan, the pastor’s brother, said: “I’m not thrilled in general with the restriction on religious liberties, Especially during what is Christian’s most holy week. He said”.

His brother, who is a Pastor too Pastor Jon Duncan, said:
“We’re going to meet as often as we can meet, and we do believe, that this right, is protected by the 1st Amendment and should be considered essential,”. He said.

On March 25th, Lodi police officers attended one of Duncan’s Wednesday services. They wanted to speak to the pastor about the county and state orders against public meetings.

The lawyer representing the church said: We plan to send a letter Monday to Governor Gavin Newsom, and San Joaquin County officials, asking that they follow the lead of other states.

He intends to argue that some other states have declared, houses of worship as essential services that are exempted, from stay-at-home orders.

He went on to say; he is planning a federal civil rights lawsuit “based on the fact that the governor and the county are violating my client’s 1st Amendment rights.”

Most churches in the US are now running Mc Donald style drive-thru confessions.

However, some churches have been holding, in-person services nationwide. Police have even arrested some of those pastors, in the state of Florida, and Louisiana.

Sally Gonzali said: “I think it’s not too bad, I can take my kids to Mc Donalds Sunday morning and then pop into the Drive-through confession on my way home. It works pretty well”. The problem is, I don’t always want my kids to listen to all my confessions, so that’s a bit tricky. She said.

Cheri McCaffrey said the Westside Baptist Church, the “Friendliest Church in Town,” held services earlier this month, and she was visited by two members trying to drop off brochures at her home.

She said: It was very unsettling, as they are still not listening and continue to gather in groups.

However, the legal issue is uncertain where churches stand; the Government relies on pastors to use discernment and to air precaution.

In the US Religious institutions are widely believed to be protected from such regulations by the concept of separation of church and state-protected in the First Amendment.

“There’s not much precedent to go on here,” said Josh Blackman, who teaches constitutional law at South Texas College of Law in Houston.

He believes the Government is not obligated to exempt houses of worship, but states have the authority to do so if they chose.

Mr Blackman notes “that, some religions, the burden of being barred from gathering in-person is greater than for others. Observant Jews and the Amish, for example, restrict the use of electricity, so streaming services online is not an option. There are also sects of Judaism that require a quorum of 10 — a minyan — to assemble in order to practice their religion”.

“These edicts, without question, substantially burden religion. The only question is whether the government has a compelling enough interest to do it,” said Blackman. “Or you might ask, is there any other way for the government to achieve its goals? And the answer is probably, no.”