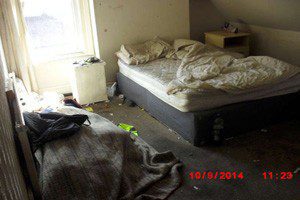 Conwy council is new landlord of several flats run by Mark Thorogood, who was jailed in June for swindling a family friend of £28,000.

A council has stepped in to take over a house which was being run by a landlord who went to jail for fraud.

Mark Thorogood had been responsible for the three flats in Maelgwyn Road in Llandudno , but was locked up in June for four years for defrauding a family friend out of £28,000.

Conwy housing chiefs have now taken on the units. A month before he was jailed , Thorogood was deemed not to be a fit and proper person to run houses in multiple occupation (HMOs).

The council is now effectively the landlord of the properties, collecting the rents and doing any repairs that are needed.

Cllr Mark Baker, Conwy’s cabinet member for Regulation said: “Taking this approach helps us ensure the tenants are safe, which is our main priority.

“However, it also sends a clear signal to others that bad landlords and owners aren’t welcome in Conwy County. If you don’t manage your properties properly, we will step in.”

Emma Edgeley, 57 from Pontllyfni, was swindled out of £28,000 in 2010 Thorogood, who said he needed the money for a mortgage deposit.

He was jailed for four years for the fraud on June 1 and Ms Edgeley has spoken out about the devastating effect his actions had on her health.

She said she had a stroke due to the stress – and subsequently fell, breaking her neck.

At the time Thorogood borrowed the money from Ms Edgeley he was a family friend but his actions forced her to sell property set aside for retirement.

Thorogood still owes the Financial Conduct Authority £104,294 for “deliberate and dishonest actions” when he was a mortgage broker and is barred from advising on financial products.

He was also the subject of a record clawback of housing benefit in Wales in 2015 , when he was told to repay £48,000 he had received from tenants for the unlicensed flats he rented out.

In December 2016 he was jailed for dodging payment of fines to Conwy County Council and was made the subject of a criminal behaviour order (CBO) – the first time one was given to a landlord in Wales.

In an interview with the Daily Post in 2015 he responded to claims he was a slum landlord by saying he was like ‘ The Pied Piper of Llandudno ’ as people would chase him down the streets asking to live in his properties.