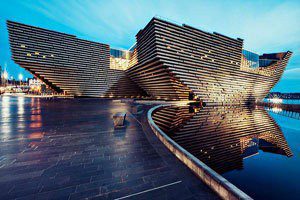 Dundee has seen an average 5.7% increase in property price. Higher than any other Scottish city

Currently prices are rising faster in Dundee than any other Scottish city, according to Aberdein Considine.

The Property Monitor Report by Aberdein Considine shows that the average house in Dundee was sold for £140,849 between April and June this year. This is an of 5.7% on the same period last year according to Aberdein Considine.

One of the reason’s amongst others is due to the the new V&A Museum as making Dundee a national draw for would be home owners and investors alike.

”I am incredibly optimistic about what the future holds for the city’s property market.”

Across Scotland, more than three quarters of those surveyed in the report said they had no intention of buying a new home, with only 6 % considering moving in the next year.

The Aberdein Considine report suggests both the ‘Beast from the East’ and fears over Brexit are making people think twice about moving with 3000 fewer homes sold in the first six months of this year than in 2017.

Meanwhile, prices rose in all of Scotland’s main cities expect Aberdeen where there was a drop of 1.2%.

It contributed to £85m being wiped off the Aberdeen and Aberdeenshire market in the first six months of this year. This maybe due to the recent decade of oil prices falling and in turn loss of jobs in the oil sector.

Not to forget the Shetland Islands which saw a whopping increase with a 20% rise with the average property now worth £190,242.

Edinburgh the capital remained the most expensive place to buy.  Edinburgh property prices may show some stagnation as data showed that more than 500 fewer property sales compared with 2017. The Aberdein Considine report indicated a lack of new housing coming onto the market which helped to increase property prices in the Edinburgh.

Property has generally performed better in Scotland than most of the UK.