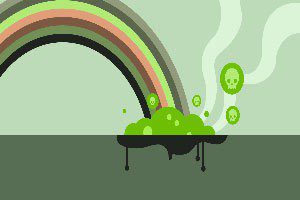 Families in need have not moved into 48 affordable homes amid claims they have been built too close to a toxic waste site.

Almost half of the 111 homes built by construction giant Galliford Try on land in Walkmill Lane, Cannock, remain unoccupied after concerns over their close proximity to the site of waste management firm Axil Integrated Services.

The waste firm says it has been left baffled by the decision to build homes so close to its land and has warned residents could be put at ‘unacceptable risk’ if they move in.

The 48 homes are among 55 owned by housing association WHG, with the remainder, which are not affordable housing, bought and occupied.

Fifty-five of the homes are owned by housing association WHG, with the remainder still owned by the developer.

But it has now been revealed that 48 of the 55 homes owned by whg are unoccupied due to the boundary issue and talks are ongoing to find a resolution.

The 56 homes owned by Galliford Try have been sold and are occupied.

He added: “We are a safety-driven organisation which recognises and manages the risks inherent in our site operations in a professional and competent manner in line with all the necessary environment and planning permits.

“For that reason, we have consistently opposed the construction of homes in close proximity to our boundary.

“It is a matter of considerable concern that home owners will live and children will play close to hazardous, toxic and flammable wastes than we allow our own staff.

“Those risks have been ignored despite us repeatedly pointing out the dangers involved.

“We are particularly dismayed that the social housing element of the development has been placed on the boundary with our site as if housing need makes risk more acceptable. We are concerned that pressure to occupy the houses will lead to people being put at unacceptable risk and we are fearful that once more our concerns are being disregarded.”

Rebecca Bennett Casserly, interim corporate director of development at WHG, said the issue was ongoing, adding: “Some queries have been raised by Cannock District Council relating to the proximity of the waste site to the boundary of the properties and we are currently discussing these further.

“This is part of a wider development of 111 homes by Galliford Try. whg has 55 of those homes and 48 of those are unoccupied due to this issue.

“Work started on the whole development in March 2016 and is due to fully complete imminently with the final landscaping works expected by the end of January. The land was identified by Cannock Council as being suitable for redevelopment several years ago and a planning application from Project AML Ltd was approved in 2016.”

Cannock Chase Council’s managing director, Tony McGovern, said: “The council is aware of the issues relating to this site and is in dialogue with whg, Axil Integrated Services and other public bodies.”

James Warrington, regional managing director of Galliford Try Partnerships, said: “We were given permission to build these homes by Cannock Chase Council in 2016.

“At that time, all relevant statutory bodies were consulted and our plans were recommended for approval by officers. We understand that WHG is now seeking to resolve the queries raised by the council in relation to some of the homes and they have our full support in this endeavour.”