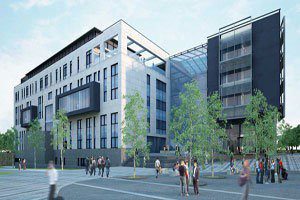 Plans to build a new housing development just behind a major road in south Bristol have been given the green light.

It would see the buildings currently on land behind Redpoint climbing center in Winterstoke Road, Bedminster, demolished and replaced with 59 flats and eight homes all of which would be affordable housing.

The site is made up of both the former buildings and yards of the Kellaway Building Suppliers and the existing site of the Winterstoke Garage.

It is bounded by Winterstoke Road, Luckwell Road and Lynwood Road and is just a stone’s throw away from the Parson Street station.

The development proposes a mix of 59 one and two bed flats arranged over three separate flat blocks.

The Lynwood Building would be the tallest on the site at five-storeys and would be filled with 12 one-bedroom and 31 two-bedroom flats.

All development would be focused around a small triangular area of public open space which would include a ‘doorstep’ children’s play area.

The eight terraced homes would be built along the Luckwell Road side of the site.

During a planning meeting at City Hall last night councillors unanimously approved the plans – despite concerns about a ‘right to access’ disputed with the Winterstoke Centre which sits to the north east of the development site.

Currently the Winterstoke Centre can be accessed via an L shaped loading dock at the end of Lynwood Road.

It can be used at all times by the tenants who use the Winterstoke Centre to load and unload vehicles – and during the meetings concerns were raised about whether residents would be blocked from accessing their homes while a truck is being unloaded.

But despite this being the main objection to the proposal members of the development control committee felt it was not enough to turn down a 100 per cent affordable housing scheme on a brownfield site.

Bishopsworth councillor Richard Eddy referred to the scheme as a “no brainer”.

“All too often we struggle to get even 20 per cent affordable housing for developments and often even less than that,” he added.

“I also know how sustainable a location it is with walking and cycling as well as a bus route and train station.

“It would be almost impossible to find a more sustainable site.

“I am worried about Winterstoke Centre and the access, but I think that is not a planning judgement it is for the developers and the centre to come to a working arrangement.”

His sentiments were echoed by Ashley councillor Mike Davies, who said that he would need “very, very good reason” to vote against the scheme.

Affordable ,, to the “buy to let investors”,, then they will rent them at extortionate rents to the working class folk who cannot afford or get a mortgage..

Should limit the number of properties they can own (buy to let), then working class people might get a chance to buy one.
Source; Bristol Live
Author; Kate Wilson
Date; 10th of January 2019
Load More Related Articles
Click To Comment