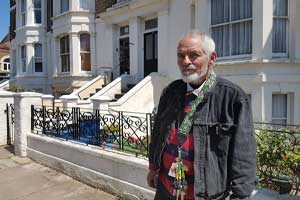 A Landlord accused of illegally renting out his property claims he is being “ruthlessly” victimised by Southend Council.

Robert Crow, 69, is accused of breaching a court order which banned him renting out his property – 19 Devereux Road, Southend – after he was convicted of 18 offences in September.

Mr Crow attended Southend Magistrate’s Court on Wednesday, where he only confirmed his name and address, not entering any pleas.

His address has repeatedly been the subject of complaints about antisocial behaviour and was the scene of a stabbing in October 2017.

Despite this, Mr Crow said he “is only helping people”, claiming those he has housed “would die” if not taken in.

He claims that the new hearing has been brought about by Southend Council, believing they are determined to oust him.

Speaking to the Echo, he said: “They’re [the courts] in collusion with Southend council, and the claims against me are just not true. I object to all that.

“I am sure you have read that I am a scumbag landlord and no good, but I am a practicing Christian and I save lives, it’s all a shambles. They’re trying to bankrupt me.

“I am currently subject to a campaign of intimidation between the council and my neighbours, but I have done nothing wrong to them, I only help the homeless.

“If I didn’t help them, they would die on the streets.

“They want me to clear out all my tenants, they’re all just NIMBYs. This is an assault on my human rights.”

The 18 charges against Mr Crow related to the dangerous, insanitary and substandard living conditions of the property which he shared with his tenants.

At the previous trial, held at Basildon Magistrates Court, heard witnesses describe water leaking through lights, a kitchen which was so cluttered and insanitary that it was unusable, bath and shower facilities which were caked in filth and tiny bedrooms hoarded with rubbish.

The court also heard some prospective tenants at the property – many in desperate situations – had been promised rooms would be cleared before they moved in only to find them strewn with Mr Crow’s personal possessions and in a filthy condition when they arrived.

Mr Crow added: “I am not a horrible man, I take in people off the streets and I help them, and now I am being ruthlessly pursued through the courts.

“My neighbours want me and all of them gone, and the council is utterly corrupt.

Wednesday’s hearing was adjourned so that Mr Crow can undergo an assessment of his health.

He will next appear at Southend Magistrates Court on April 17 for a plea and the trial preparation hearing.